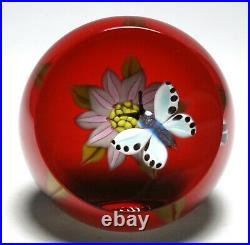 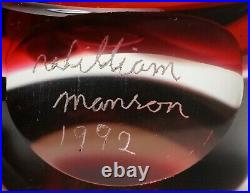 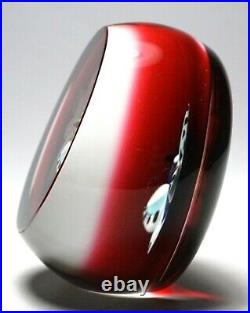 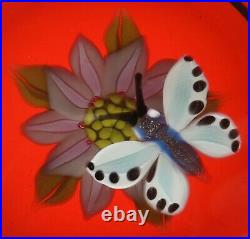 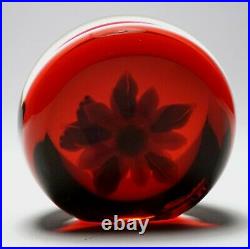 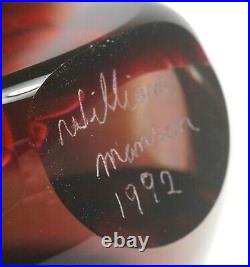 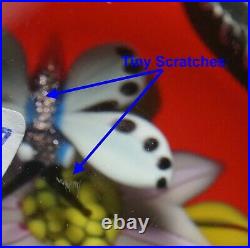 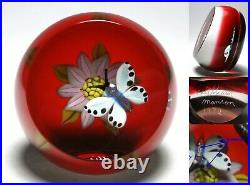 Spotted Butterfly & Pink Flower Upright Faceted Paperweight. Spotted Butterfly and Pink Flower Upright Faceted Paperweight. This is an unusual upright paperweight featuring a spotted butterfly hovering over a multicolored ten petaled flower. The butterfly has a blue and aventurine (sparkly) body, white eyes, white wings with black spots, black antennae. The flower has variegated pink and grey petals, a yellow frit center, and striped green sepals. The design is set over a burgundy red stain ground. The paperweight is designed to be displayed upright resting on a small facet. The back is polished flat and there is one large front facet. It is signed on the small facet / base “William Manson 1992″. Please see my notes below on the signature and also on the condition of this paperweight. Although it has a few minor flaws, this unusual paperweight displays beautifully and will augment any collection of Scottish paperweights. The signature made me wonder which William Manson (father or son) made this paperweight. In later years, the father always added a Snr. To his signature and the son signed his weights with just William Manson. After consulting with his son, William David Manson, I was able to establish that this paperweight was made by his father, William Manson, Snr. During a period that he was employed by Caithness but also had a small studio at home. Note on condition : This paperweight has a few scratches and flaws which I will list here and also display in the pictures. There are two tiny (less than 1/16) scratches on the face of the paperweight and a scuff on the side near the back. On the back, there is a small area where a piece of tape or label has discolored the red stain used for the ground. And, not shown are some minor scratches on the back. As stated above, the paperweight displays beautifully. Please Note: The stand shown in the pictures is not included with the paperweight. It is shown for illustration only. Note on white glare. Please ignore the white areas, they are glare from the light. Started his glass working career at Caithness Glass at the age of 15 in the 1960s. He apprenticed with Paul Ysart. Manson left Caithness in 1971 to work at Ysart’s Harland Glass and rejoined Caithness several years later in 1974. He was at Caithness on and off between 1974 and 1997. During this period he also had a small studio at home. In 1997 he left for good to form his own studio William Manson Paperweights. After Perthshire closed in January 2002, William Manson Sr. Started Phoenix Paperweights to engage three workers from Perthshire. They only lasted a year and issued paperweights in 2002 and 2003 before closing in August 2003. Phoenix operated in the Manson works in Perth, Scotland. Made collaborative paperweights with John Deacons. He is now in the process of setting up his own studio. Large Size: Just under 2 5/8″ wide (diameter) by 2 7/16″ high by 1 1/2 thick. There is a small facet for the base and a larger facet for the face. Signature: Signed on the small facet / base “William Manson 1992″. Condition: Very good condition. All of these flaws require careful examination to see. Allan’s Paperweights is owned by Allan Port. If in doubt, please check with me first. Please do not ask me to declare this a gift. The item “William Manson Snr. Spotted Butterfly & Pink Flower Upright Faceted Paperweight” is in sale since Sunday, March 14, 2021. This item is in the category “Pottery & Glass\Glass\Art Glass\Paperweights”. The seller is “paperweights” and is located in Wellesley, Massachusetts. This item can be shipped to United States, Canada, United Kingdom, Germany, Japan, France, Australia.